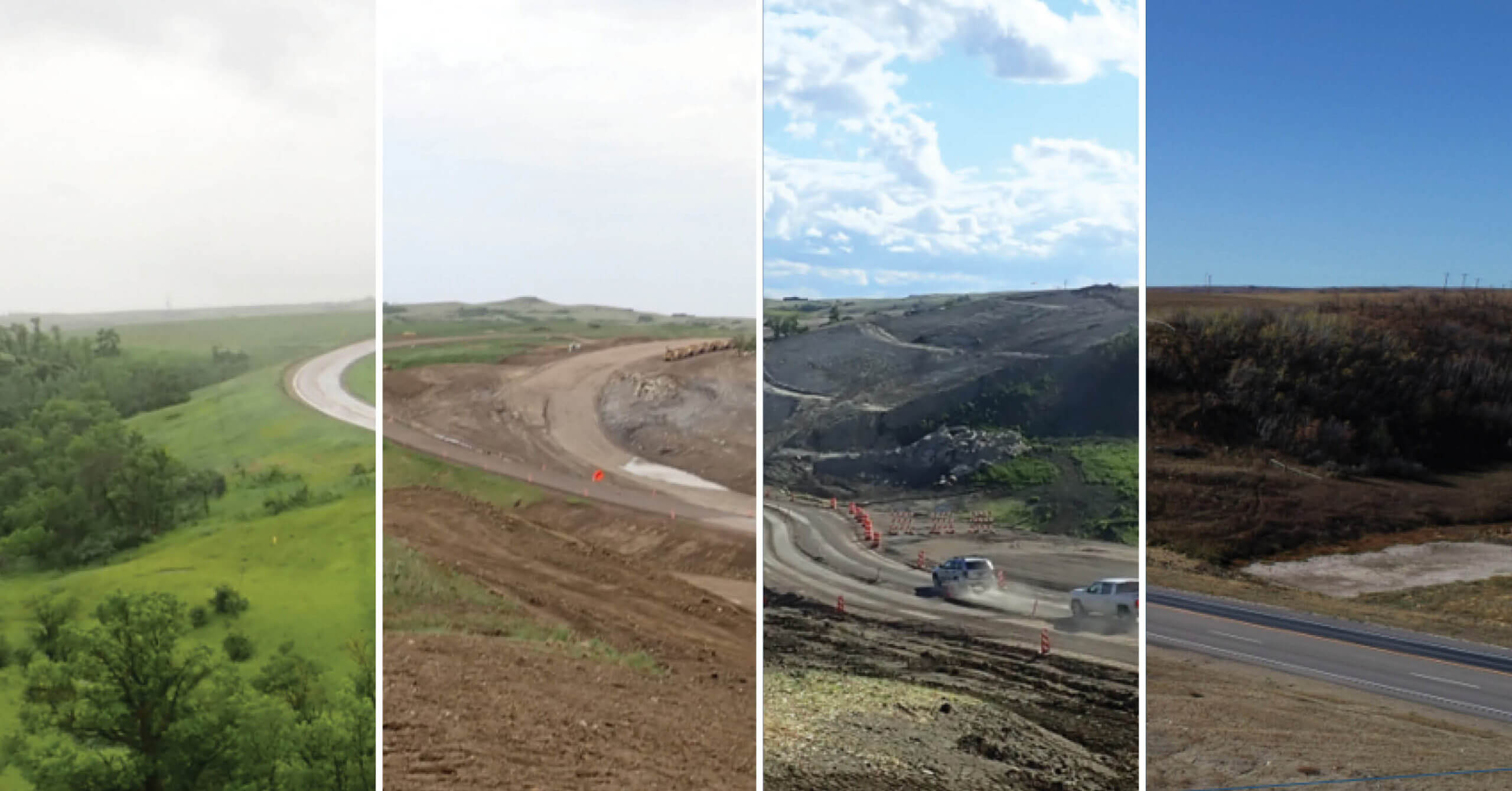 Williston, North Dakota — ND 1804 is a historic highway that shoots through the state’s western rolling hills and parallels the beautiful Missouri River and Lake Sakakawea, donning many mesmerizing landmarks and cultural sites along the way. The historic highway is named for the year Lewis & Clark traveled westward and follows the same path the explorers travelled.

The highway has wound through this historic area without much traffic — until recently. In 2010, the Bakken Oil Boom caused a 400% increase in average annual traffic along the route, 45% of which was heavy-duty truck traffic.

“With the last major rehabilitation being built in 1983, the roadway had 225 vehicles a day and a design speed of 50 mph,” noted Ulteig Senior Project Engineer, Josh Kueber, P.E. “It was impossible to foresee an increase in traffic by ten times and an increase in the speed limit to 65 mph. This increased the minimum stopping sight distance to notice obstacles and brake to avoid an obstacle from 13 car lengths (at 50 mph) to 21 car lengths (at 65 mph).”

The highway, while sturdy before, was not originally built to handle this kind of traffic – in particular, the heavy-duty tractor-trailer trucks hauling oil. In order for the roadway to be able to temporarily handle these changes in traffic, the existing roadway was posted for reduced weight limits. An entire re-construction of the highway was due — and Ulteig was called upon to make it happen.

The project was not without challenges. The complexity of the rolling hills, land slide area, stream hydraulics, USACE recreational land, and cultural sites surrounding the construction area proved to be mighty obstacles.

“A lot of times when people think of North Dakota, they picture the easterly side of the state that is flat agricultural land. But there’s a lot of terrain change on the western side of the state, especially along the Missouri River Escarpment,” said Kueber.

When working with rolling terrain, one needs to address opportunities for passenger vehicles to pass large vehicles on steep grades. This is accomplished by adding passing/climbing lanes. Because of rolling terrain, all intersections and accesses were reviewed for intersection sight distance, and several driveways had to be relocated due to inadequate sight distance.

The terrain of this area consists of many hills which could contain lignite. When groundwater travels along the lignite, it can create a slippery plane that allows for the soil to slide. There was an existing large hill approximately halfway through the project that contained lignite seams with an active slide.

The project also traverses a mile of recreational USACE-controlled lands along White Tail Bay. White Tail Bay is part of the Lake Sakakawea-operating flood pool, requiring any material placed below an elevation of 1858.6 feet to be mitigated. White Tail Bay had just recently had a second boat landing constructed at a new location to accommodate seasonal changes in the lake levels. This roadway improvement constructed a right turn lane at the new access. The initial concept would have resulted in the costly extension of a triple barrel box culvert, but our team proposed shifting the access easterly, avoiding the box culvert extension and allowing more room to improve the access grades. The cumulative effect of roadway widening, turn lanes, and access improvements, could have had severe impacts to the USACE flood pool. Ulteig leveraged its experience from previous projects and proposed lowering the roadway to maintain the original footprint and provide a widened ditch along the roadway to mitigate all flood pool impacts.

“This project involved a number of proposed solutions to reduce, minimize, and mitigate impacts created by the project. Josh and the rest of the team did a great job of coming up with unique design alternatives to address these issues,” said Thomas Fakler, P.E., Technical Manager with Ulteig’s transportation team.

Respect for the Land, and the People

Along this historically rich corridor, Ulteig’s transportation specialists located 55 cultural sites. To be respectful of the land and the people who lived there, Ulteig invited both a culture specialist group, Beaver Creek Archeology, and a group of tribal monitors to evaluate the land before construction took place — a standard practice for any North Dakota Department of Transportation (NDDOT) project.

“With 1804 being such a historic highway, there were several cultural sites which we had to design around. It was important for us to build a strong relationship with the Indigenous peoples in the area to really make sure we were taking their desires into account. For this project, the team worked directly with the Sioux, Chippewa, Mandan, Hidatsa, and Arikara nations,” said Kueber.

“Although it was a time intensive situation and required well planned coordination, that recognition and respect of the cultural sites was important to us as engineers of the project. By using ingenuity allowed within design guidelines, no cultural sites were impacted,” added Fakler.

Kueber and Fakler attribute the success of the two-year project to the strength and expertise of their team, and their ability to coordinate with multiple agencies to cohesively complete the project.

“One of the best things that Ulteig was able to provide to this project was our ability to do the environmental analysis and the design within the same firm,” said Fakler. “We can intake large projects holistically, managing and overseeing every aspect from start to finish. A lot of firms can’t do that.”

Though many aspects of the project were completed by the Ulteig team, group facilitation of multiple entities and leveraging existing relationships were also critical parts of envisioning the highway.

“Having all stakeholders engaged and on the same page at all times is crucial,” said Kueber. “For this project, we had monthly meetings with North Dakota Department of Transportation, the U.S. Army Corps of Engineers and the Federal Highway Administration, and we began working with the utility groups right away. This allowed us to include all of the utility impacts in our environmental document, providing an all-encompassing document.”

Besides communicating with the stakeholders, assessing the needs of the community where the project took place was also a necessary ingredient to the success of the project.

“When you’re coordinating with 38 different landowners, a strong aptitude for community facilitation is so important. It’s all about making sure we see everyone’s concerns, and develop solutions alongside them,” said Fakler. “The thing that was really unique about this project was that we had no condemnations. All Right-of-Way (ROW) was agreed upon, which is almost unheard of for a project of this scale.”

For this project, Ulteig was able to develop an app that was consistently updated with live information about the ROW status, ensuring that the North Dakota Department of Transportation was always up to date.

The client, the North Dakota Department of Transportation, was so impressed with the final product that they authorized the entry of the project in the American Council of Engineering Companies of North Dakota’s 2021 Engineering Excellence Award competition, noting the project’s, “outstanding features, unique aspects, and innovations.”

Ulteig is the One for the Job

The story of Highway 1804’s reconstruction provides hope for rural areas throughout the U.S. and Canada that are in need of updated, reliable transportation infrastructure. Ulteig’s transportation engineers leverage their expertise to craft solutions to meet the needs of local areas today…and tomorrow. 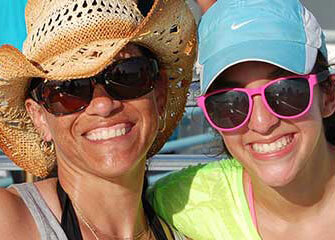